Have you ever come across someone on the Internet that you suspected was a paid government troll? Well, there is a very good chance that you were not imagining things. Thanks to Edward Snowden, we now have solid proof that paid government trolls are using "psychology-based influence techniques" on social media websites such as YouTube, Facebook and Twitter.

Documents leaked by Snowden also reveal that government agents have been conducting denial-of-service attacks, flooding social media websites with thinly veiled propaganda and have been purposely attempting to warp public discourse online. If we do not stand up and object to this kind of Orwellian behavior, it is only going to get worse and worse.

In the U.K., the Joint Threat Research Intelligence Group (JTRIG) is a specialized unit within the Government Communications Headquarters (GCHQ). If it wasn't for Edward Snowden, we probably still would never have heard of them. This particular specialized unit is engaged in some very questionable online activities. The following is an excerpt from a recent piece by Glenn Greenwald and Andrew Fishman:

Though its existence was secret until last year, JTRIG quickly developed a distinctive profile in the public understanding, after documents from NSA whistleblower Edward Snowden revealed that the unit had engaged in "dirty tricks" like deploying sexual "honey traps" designed to discredit targets, launching denial-of-service attacks to shut down Internet chat rooms, pushing veiled propaganda onto social networks and generally warping discourse online.

We are told that JTRIG only uses these techniques to go after the "bad guys."

But precisely who are the "bad guys"?

It turns out that their definition of who the "bad guys" are is quite broad. Here is more from Glenn Greenwald and Andrew Fishman:

Particularly disturbing to me is the phrase "domestic extremist groups". What does someone have to say or do to be considered an "extremist"? For example, the English Defence League is a non-violent street protest movement in the UK that is strongly against the spread of radical Islam and sharia law in the UK. So if they are "extremists", how many millions upon millions of ordinary citizens in the United States would fit that definition?

When conducting operations against "extremists", psychology-based influence techniques are among the tools that JTRIG uses to combat them online. The following comes from one of the documents that was posted by Greenwald and Fishman: 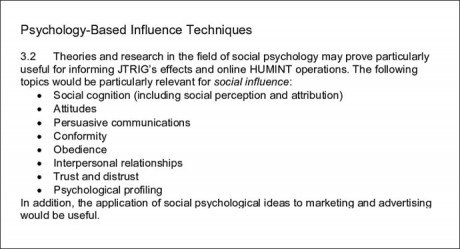 In other words, these government trolls try to mess with people's minds.

And here is another document that was posted by Greenwald and Fishman that talks about how JTRIG uses YouTube, Facebook and Twitter to accomplish their goals: 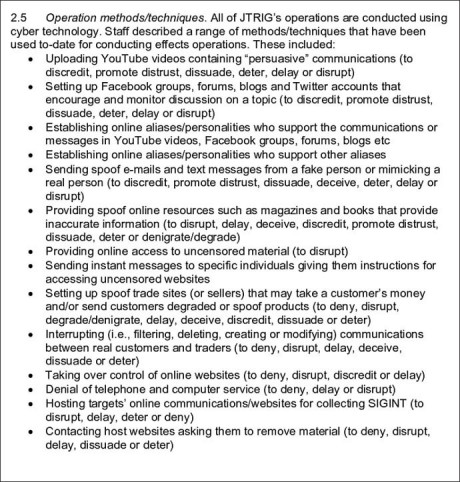 It is very disturbing to think that some of the people that we may be interacting with on YouTube, Facebook and Twitter are actually paid government agents that are purposely trying to feed us propaganda and misinformation.

And of course this kind of thing does not just happen in the United Kingdom. In Canada, it has been publicly admitted that the government uses paid trolls to warp Internet discourse. The following comes from Natural News:

You've probably run into them before — those seemingly random antagonizers who always end up diverting the conversation in an online chat room or article comment section away from the issue at hand, and towards a much different agenda. Hot-button issues like illegal immigration, the two-party political system, the "war on terror" and even alternative medicine are among the most common targets of such attackers, known as internet "trolls" or "shills," who in many cases are nothing more than paid lackeys hired by the federal government and other international organizations to sway and ultimately control public opinion.

Several years ago, Canada's CTV News aired a short segment about how its own government had been exposed for hiring secret agents to monitor social media and track online conversations, as well as the activities of certain dissenting individuals. This report, which in obvious whitewashing language referred to such activities as the government simply "weighing in and correcting" allegedly false information posted online, basically admitted that the Canadian government had assumed the role of secret online police.

You can actually watch a video news report about what is happening up in Canada right here.

Needless to say, the U.S. government is also engaged in this kind of activity. For instance, the U.S. government has actually been caught manipulating discourse on Reddit and editing Wikipedia. When it comes to spying, there is nobody that is off limits for our spooks. It just came out recently that we even spied on three French presidents, and they are supposed to be our "friends."

And just like the U.K., the U.S. government has a very broad definition of "extremists." This has especially been true since Barack Obama has been in the White House. If you doubt this, please see my previous article entitled "72 Types of Americans That Are Considered 'Potential Terrorists' in Official Government Documents."

Michael Snyder's book entitled "Living A Life That Really Matters" is available in paperback and for the Kindle on Amazon.com.