A generic photo posted on the Israel Defense Forces's Instagram account created a national stir last week showing a soldier holding a Hebrew Bible with both the Old and New Testament at the first in-person ceremony since the COVID pandemic.

"For the first time since the outbreak of the coronavirus, new recruits of the Armored Corps, on Aug. 21, were sworn in at the traditional ceremony at the Armored Corps monument," the generic caption read. 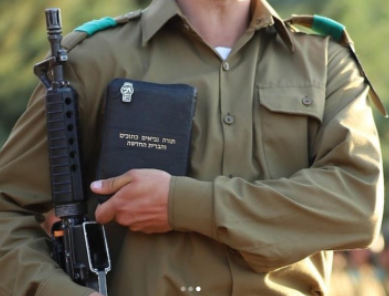 The photo caused an explosion on social media with several negative comments accusing the IDF of trying to convert recruits to Christianity. Many Israelis—perhaps unaware that all Christians believe in the Old Testament as the Word of God—were angry that the New Testament was paired with the Tanach.

The IDF allows Christian soldiers to pledge allegiance to Israel on a Bible which includes a New Testament, just as Muslims have always done so on a Quran. Jewish soldiers use a Tanach for their ceremony.

But while it is normal for a Christian Israeli-Arab recruit to receive a full Bible from the IDF, it would most likely be in Arabic. What makes this picture remarkable is that this Old and New Testament together is in Hebrew and that, upon closer inspection, it has a pin from Natzor, a pre-army program for Messianic Jewish recruits run by a local ministry.

This likely indicates that the soldier holding the Bible is an Israeli Hebrew-speaking Messianic Jew.

Along with the controversial photo, Channel 20 – an Israeli news channel – reported allegations of Messianic literature being distributed to soldiers. The IDF said it takes allegations of missionary activity seriously.

"The IDF is a melting pot of Israeli society therefore it is fitting to protect it from missionary campaigns," the IDF said in a statement. "The chief military rabbinate works hard to strengthen the morale of our troops for the sake of all of our soldiers, from all religions. The reality in which outside missionary forces are attempting to infiltrate the army is bizarre and dangerous."

Two days after the photo was posted, a famous Israeli rapper and right-wing activist known as The Shadow (HaTzel in Hebrew), uploaded the same image juxtaposed with an image of a Muslim IDF soldier pledging allegiance on a Quran.

"I saw that many raised an eyebrow about the photo of a soldier pledging allegiance on a New Testament," rapper Yoav Eliasi wrote. "So the IDF also has Christians. It's not weird and it's not strange. Each one pledges on what he believes and they swear to protect the Land of Israel and the people of Israel with their lives. Christian and Arameans pledge on the New Testament, Muslims on the Quran, Jews on the Tanach. Encourage them, don't bring them down! The IDF is a melting pot, and this is a touching photo! I'm proud of anyone who protects this country."

The photo received over 13,000 likes and garnered more than 600 comments as of Tuesday night, many agreeing with Eliasi while others remained defiant.

Several Messianic Jews used the comment section to correct misunderstandings and to explain how they can still be Jews and believe in the New Testament.

"I am Jewish, Israeli and I believe Yeshua is the Jewish Messiah. I won't change my mind because of the opinion of a majority," one wrote.

Another encouraged those who commented to read Isaiah 53 in the Tanach and compare to the New Testament.

"It was so touching to read the comments and to see that in the Body of the Messiah in Israel we have young people who are secure and proud of their faith. Keep going! You are a source of pride to God, your parents, the congregations where you grew up, and to the Body as a whole," the commenter wrote. "'For I am not ashamed of the gospel, because it is the power of God that brings salvation to everyone who believes: first to the Jew, then to the Gentile,' Romans 1:16."

For the original article, visit allisrael.com.