⇑ back to "Video"

Following are snippets of the top stories featured this week on charismanews.com. We invite you to visit the links to read the stories in full.
Bible Prophecy Is 'Essential' in Current Russia-Ukraine Climate, End-Times Experts Say

Editor's Note: This is Part 2 of a two-part series. For Part 1, visit this link.

Is our world on the brink of war? That seems to be the question on everyone's mind as news reports of the Russia-Ukraine tensions pour in. Pastor Jack Hibbs of Calvary Chapel Chino Hills, California, and Amir Tsarfati of Behold Israel agree that the world is moving to "a very dark place"—one that could explode into World War III. But the two agree on something even more important: In this hour, believers must pay more attention than ever to biblical prophecy.

Russia has planted seeds for the weakening of Europe and NATO for many years, Tsarfati says, adding that this situation goes back to the 1930s when Stalin was in power.

'You Were Sent to This Church to Destroy Us': Controversial Pastor Calls Out Alleged Witches

"We got first and last names of six witches that are in our church," says Pastor Greg Locke in a video clip from a Feb. 13 sermon that now has more than 1.2 million views. "And you know what's strange? Three of you are in this room right now."

The pastor of Global Vision Bible Church in Mt. Juliet, Tennessee, hit headlines recently for his "burning service" in which members torched books such as Harry Potter and the Twilight series, along with Ouija boards and other symbols of the occult. And now, his bold exposure of alleged witches within his own congregation has made national and international news.

Earlier today, Pastor Greg Locke threatened to expose the six witches who are members of his church. pic.twitter.com/NSoTqQayQk

'It Is No Longer a Guessing Game'; End-Times Alliances Are Forming

Editor's Note: The opinions of this writer and the dates he has mentioned for specific events are not necessarily shared by Charisma Media.

The ever-restless drums of war are sounding ever more rapidly. Mankind's enduring addiction to violent conflict is sure to reach a crescendo as nuclear weapons in the hands of despots signal a certain ending to hopes for peace.

China's frenetic expansionism, the North Korean madness, Russia's return to forceful USSR-sized collectivism and wooing of Islamic acolytes such as its current military support of Kazakhstan's Moscow-educated strongman are but the beginning. Stir in the rebirth of Turkey's desire to re-establish its Ottoman glory days while adding huge gulps of Islamic suicidal deism and we begin to understand the depth of the threat.

What John Bevere, Mario Murillo and Kenneth Hagin Sr. Have in Common

Here's a word that will minister great peace to some. On the phone the other day, a dear minister friend of mine, older than I am with 40-plus years of ministry experience, said this: "The Lord called my wife and me to influence the two or three."

I believe he meant geographical places or cities. I have not been able to shake that word.

When John Bevere became a household name and author of several bestselling books translated into over 90 languages at last count, it gave me something to shoot for. Boy, was I wrong! I don't have that kind of grace or that many talents. When I stopped making that a goal I entered a place of rest concerning my calling to write. Of course, I want more people to read my books, but my motive is to bless them with the message, not to build a following.

I have been making calls to persons on the front line of the Canadian truckers' event. Given that it is a cry for freedom, the movement was birthed from the heart of God. So long as the truckers can keep out persons from the outside with nefarious plans, this is a spiritual event.

One of those I called was Harold Jonker, co-owner of Jonker Trucking Company of Canada, who drove the first truck in the first convoy into Ottawa, Ontario, Canada. 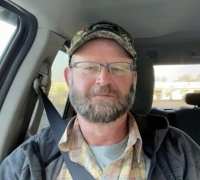 Jonker took my call, but he did not say a word because the group was busy praising the Lord. Without a single comment, he merely held the phone so I could hear what was happening.