Disturbing Trend: Do California Politicians Usurp 'We the People?'

Born into an aristocratic family, Hermann Wilhelm Göring (1893-1946) was a German military officer who served as a pilot during World War I. After meeting the Austrian Adolf Hitler in 1921, Göring became instrumental in the Führer's rise to power.

In his own callous and mindless pursuit of power, Göring "nazified" in April 1933 the Prussian police into the Geheime Staatspolizei (Secret State Police), abbreviated Gestapo.

After the war, Göring was the highest-ranking Nazi official to be tried at Nuremberg. He was found guilty on four counts by the International Military Tribunal and was sentenced on Sept. 30, 1946 to death by hanging.

Reichsmarschall Göring appealed the sentencing, asking to be shot as a soldier instead of being hanged as a common criminal, but the court refused. He committed suicide by taking a potassium cyanide capsule on Oct. 15, 1946, the night before he was to be executed.

The Allies granted U.S. Army Captain Gustave M. Gilbert (1911-1977), a German-speaking intelligence officer and prison psychologist, free access to Göring, Speer, Hess, von Ribbentrop, Frank, Jodl, Keitel, Streicher and eight others to study what they had to say in their own defense. Eleven of them were later convicted as war criminals and sentenced to death. The others served prison sentences, ranging from eight years to life.

Dr. Gilbert's interviews with Göring and the other Nuremberg defendants were published in 1947 under the title Nuremberg Diary.

In light of the 2020 COVID-19 regulatory overreach foisted on the American people by largely blue states governors and mayors, Gilbert's interview with Hermann Göring from his cell is a downright eye-opener.

On the question, "How did you get the German people to go along with this?" Göring said:

"Why, of course, the people don't want war, neither in Russia nor in England nor in America, nor, for that matter, in Germany. That is understood.

"But after all, it is the leaders of the country who determine the policy, and it is always a simple matter to drag the people along, whether it is a democracy or a fascist dictatorship or a parliament or a communist dictatorship."

Gilbert pointed out, "There is one difference. In a democracy the people have some say in the matter through their elected representatives, and in the United States only Congress can declare wars."

To which Göring replied: "Oh, that is all well and good, but voice or no voice, the people can always be brought to do the bidding of the leaders. That is easy. All you have to do is tell them they are being attacked" [read: COVID-19/the burning and looting of American cities] "and denounce the pacifists for lack of patriotism and exposing the country to danger." [read: holding church services, not wearing masks and so on, endangers the whole community]. "It works the same way in any country."

To translate Reichsmarschall Hermann Wilhelm Göring's acumen into contemporary vernacular: "It's easy to place people in bondage to government, all you need is fear and panic. As people become fainthearted, they cower and willingly surrender their rights by accepting 'control' over free speech, religious freedom and more ... controls that otherwise would never, ever be accepted."

Why is it that everyday Americans can't get the simple, straightforward facts on the real COVID-19 fatality rates? How many people did actually die from the coronavirus instead of with it? Let's have a look at the COVID-19 Statistics of Ventura County, California. 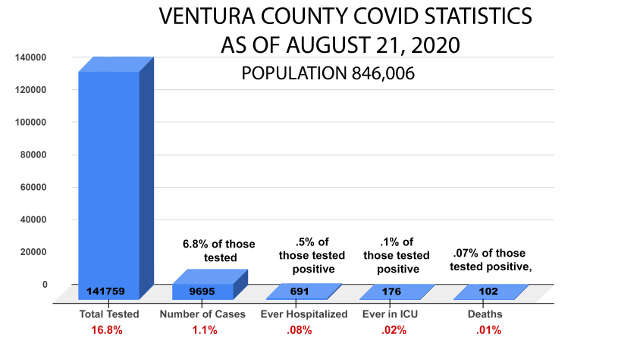 As the Ventura County Star reports: "At least 115 deaths in Ventura County have been linked to COVID-19. That doesn't mean the virus was the only cause of death or even the ultimate cause.

"In all but two of the cases, the people who died had preexisting conditions, known as comorbidities, believed to have made them more susceptible to severe illness or to have played some other role in the death.

"The comorbidity can include any condition that could have contributed with some doctors saying the most common factor is obesity."

"In early April, a 37-year-old man died after a fentanyl overdose. He tested positive for COVID-19. The virus was identified by the medical examiner's office as a contributing factor in the death, triggering questions about how the virus played into the death."

In short: Two Ventura County residents died from COVID, while the other 113 died from something else. Although they tested positive for the virus, that was not the cause of death.

Rather than being just a local trend, deceptively and loosely substituting "with it" for "from it," has been carried out nationwide from the very start of the outbreak. By its own admission, the Centers for Disease Control and Prevention [CDC] reported that as of Aug. 15, 2020, for 6% of the deaths, COVID-19 was the only cause mentioned, meaning that 94% died from something else.

In his unquenchable thirst for power, Newsom quite closely resembles 18th-century King George III, whom the American founders rejected and defined in their catalog of grievances in the Declaration of Independence as "A prince, whose character is thus marked by every act that may define a tyrant," hence "unfit to be the ruler of a free people."

Equally unfit to be the ruler of the free people of California, Newson single-handedly overrode 4.6 million Californians who on March 7, 2000 had voted with 61.2% in favor for state statute California Proposition 22, Limit on Marriages, which declares that only marriages between men and women are legally binding in California.

On Aug. 12, 2004, the California Supreme Court voided all of the marriage licenses for same-sex couples that had been issued freely under Newsom's direction in the early months of that same year. Three years later, the unfledged Mayor Newson admitted to having committed adultery with his best friend's wife.

On Nov. 6, 2018, an estimated 80-85% of California evangelical and pro-life Catholic Christians elected Gavin Newsom as their governor by the simple act of not bothering to vote.

In 2020, Gov. Newsom became the first in the nation to issue a mandatory, statewide shelter-in-place edict, thereby singlehandedly putting 40 million California residents and the world's fifth largest economy in harm's way. In his scaremongering announcement that "56% of Californians—25.5 million people—could be infected with coronavirus in the next two months," the troublesome governor was off by 98%.

A month later, April 24, 2020, he crooned to The Wall Street Journal, "We are going to do the right thing, not judge by politics, not judge by protests, but by science."

Grandiose Gov. Newsom all by his lonesome decides what is right, just and fair. In his delusions of grandeur, he makes himself into the regal sovereign of California as he tramples underfoot every aspect of its citizens' "unalienable rights." To him, liquor stores, marijuana distribution centers and abortion clinics are "essential," whereas California churches are "nonessential."

In persisting to report that the barbaric and malicious ransacking and burning of American cities and businesses is "mostly peaceful," the mass media have lost their place as a cogent force in the culture. Likewise, career politicians of the Newsom-type, who by blatant abuse of office and tyrannical proclamations have ruined 65% of small businesses—the lifetime work and livelihood for many—have forfeited their right to serve at the behest of the true owners of America: "We the People."

Before 75% of evangelical and pro-life Catholic Christians again consider staying home on Nov. 3, 2020, Election Day, let's first listen to what founder Samuel Adams (1722–1803) had to say: "If ye love wealth better than liberty, the tranquility of servitude better than the animating contest of freedom, go home from us in peace. We ask not your counsels or arms. Crouch down and lick the hands that feed you. May your chains set lightly upon you, and may posterity forget that ye were our countrymen."

May Gideons and Rahabs continue to stand.

David Lane is the founder of the American Renewal Project.

David Lane is the founder of American Renewal Project.