If Donald Trump Wins, He Will Be 70 Years, 7 Months And 7 Days Old on His First Full Day in Office

A couple of weeks ago, it looked like Hillary Clinton was all set to cruise to victory, but now the FBI has delivered an election miracle in the nick of time.

Of course it is entirely possible that the national polls might have been seriously wrong, but even the state polls in the most important battleground states consistently had bad news for Trump. So things didn't look good for Trump at the time, but now that the FBI has renewed their investigation into Hillary Clinton's emails the poll numbers have shifted dramatically in Trump's favor.

As I write this article, the national polls have really tightened up. In fact, the latest ABC News/Washington Post tracking poll puts Trump one point ahead of Clinton. Trump has all of the momentum at the moment, but that does not mean that he is going to win. As we have seen already in this race, one day can literally change everything.

And as I noted yesterday, more than 23 million Americans have already voted, and most of that voting was done during a period of time when Hillary Clinton was doing very well in the polls.

So we shall see what happens. But if Trump does win on Nov. 8, there is a fact about his birthday which will start to get a lot of attention.

And if Donald Trump wins the election, Jan. 21 will be his first full day in office.

Of course Trump would be inaugurated on Jan. 20, but he would only be president for part of that day.

So that means that Donald Trump would be 70 years, seven months and seven days old on his first full day as president of the United States.

And this would happen during year 5777 on the Hebrew calendar.

These amazing "coincidences" were first pointed out on Facebook by a user named Alyson Kelly. Some may take these numbers as a sign that Donald Trump is supposed to become the next president, but I want to make it exceedingly clear that I do not know what is going to happen, nor am I making any sort of prediction about what is going to happen.

Someone who does believe that Trump is going to win is Glenn Beck. He was been virulently anti-Trump throughout this campaign, but now he is convinced that Clinton will be unable to overcome this new email scandal, and he is calling this renewed investigation by the FBI "the greatest gift given to any candidate of all time in the history of America."

Beck also says that if Clinton wins now it will be evidence that "magic exists," and he is currently projecting that Trump should win the national vote by five points.

"Let's just say he was 8 points, that was fair to say, eight points behind last week," Beck said, according to a transcript posted on his website. "He should win by five points."

Beck later added: "How can the next president face a possible collapsing economy, possible war with Russia, and a current war with ISIS? Oh, and also, be under FBI investigation and indictment? Can't. Can't."

The conservative personality called the latest FBI revelation "the greatest gift given to any candidate of all time in the history of America" and added that if Clinton still managed to win, it would be akin to proof "magic exists."

Hopefully Glenn Beck is right, because none of us should want to see Hillary Clinton in the White House.

She is the most evil, corrupt and scandal-ridden politician of this generation, and I can't understand how any American in their right mind could possibly vote for her.

And the hits just keep on coming. Wikileaks has just released an email in which John Podesta told Clinton "fixer" Cheryl Mills that they were "going to have to dump all those emails so better to do so sooner than later." 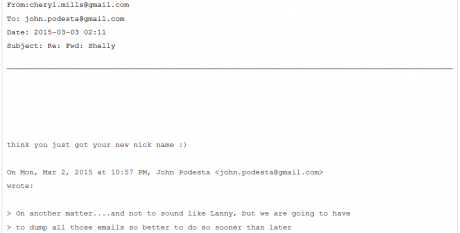 It was not entirely clear what Podesta meant by that phrase, but it could potentially be smoking gun evidence of obstruction of justice.

Back in 2008, Barack Obama was new, intriguing and mysterious. We didn't know a lot about him, and so one can almost understand how the American people could have been fooled by him.

But in 2016, Americans know more about Hillary Clinton than they have ever known about any candidate in modern American history.

The Clintons have a history of crimes and scandals that goes all the way back to the 1980s, but about half the country is choosing to ignore all of that history and vote for her anyway.

I believe that this election is America's final exam. Originally there were 17 Republicans and five Democrats running for the presidency. When you throw in the major third-party candidates, that brings us to a total of approximately 25 people that the American public could have chosen from.

If the American people willingly choose the most wicked candidate out of all of them after everything that has been revealed, I don't think that anyone will be able to say that we don't deserve the bitter consequences that follow that decision.

The time for talking is almost over, and shortly we shall find out which path the American people have chosen.

If that choice turns out to be Hillary Clinton after everything that we have seen during this election cycle, I truly believe that we will have reached the point of no return as a nation.

Michael Snyder's book entitled "Living A Life That Really Matters" is available in paperback and for the Kindle on Amazon.com.