Jesus Didn't Make the Gospel More Comfortable, and Neither Should We

The gospel of Jesus Christ is called the "Good News." But today's post-Christian world views the gospel as anything but good news, as the message of salvation through faith in Jesus Christ is often times offensive. In his new book, Hope for This Present Crisis,Dr. Michael Youssef calls true believers to an unwavering stance when it comes to God and His Word.

"The message of the kingdom of God won't win any popularity contests," explains Youssef. "But it is the truth, and we need the courage to defend God's truth boldly and without compromise. We must stop chasing after the approval of this fallen world. Jesus never compromised the truth to win people over. He never soft-pedaled His message. Whenever Jesus introduced the gospel, He always led with the high cost of being His follower. He always presented the gospel in strong, even confrontational terms."

According to Youssef, Jesus didn't "sell" the gospel as if it were merchandise. "He violated every rule of good salesmanship. When a man named Nicodemus came to Jesus by night, it was Nicodemus who sounded like a salesman. He approached Jesus with flattery and compliments, a technique straight out of Salesmanship 101: 'Rabbi, we know that you are a teacher who has come from God. For no one could perform the signs you are doing if God were not with him' (John 3:2b, NIV).

"Jesus ignored this attempt at flattery and went straight to the heart of the matter, telling Nicodemus that if he wanted to see the kingdom of God, he had to be born again," Youssef says. "He boldly and forcefully told Nicodemus the uncompromised truth."

Nicodemus was a member of the elite Pharisee sect, who considered themselves righteous because of all the rituals and rules they kept. Jesus knew He had to penetrate this smug, self-satisfied mindset. His response to Nicodemus was blunt and even shocking: "You must be born again." In other words, following Christ is not just a matter of believing the right doctrines, attending a particular church, or becoming more religious. It involves a complete spiritual transformation. (See John 3:1–24.)

Youssef asks his readers an intriguing question, "When was Nicodemus born again? His spiritual rebirth didn't occur on the night that Jesus told him, 'You must be born again.'

"We don't know the exact moment of conversion experience of Nicodemus. It may be that Nicodemus was there at the foot of the cross during those awful hours of the crucifixion. Perhaps he remembered the words Jesus spoke to him during their late-night visit: 'As Moses lifted up the snake in the wilderness, so the Son of Man must be lifted up, that everyone who believes may have eternal life in him' (John 3:14–15). It may be that he was born again right there at the foot of the cross.

"One thing is clear: the bold, uncompromised gospel that Jesus proclaimed accomplished its purpose. Nicodemus was transformed—born again," Youssef says. "That's the power of God's truth, proclaimed without compromise or hesitation. It's the power to transform lives—and transformed lives change societies and revive dying nations."

Hope for This Present Crisis is available through Amazon, Barnes and Noble, BAM, ChristianBook.com and Leading The Way.

Youssef was born in Egypt and lived in Lebanon and Australia before coming to the United States and fulfilling a childhood dream of becoming an American citizen. He holds degrees from Moore College in Sydney, Australia, and Fuller Theological Seminary in California, with a Ph.D. in social anthropology from Emory University. He founded The Church of The Apostles, which was the launching pad for Leading The Way's international ministry. Dr. Youssef has authored more than 40 books, including popular titles like Jesus, Jihad and Peace and Saving Christianity?

Youssef is the host of the popular TV and radio broadcast Leading The Way with Dr. Michael Youssef, which airs more than 13,000 times every week across six continents in 26 languages—reaching audiences in nearly every major city in the world. His programs attract tens of millions of viewers weekly in the U.S. on major TV networks, including TBN, Daystar, Fox Business, Lifetime, GOD TV, CTN, NRB TV and more.

Equipped with a keen understanding of the Bible, the Middle East, sociological trends in the Western world and popular Christian worldview issues, Youssef is a sought-after voice whose expertise is regularly requested on both secular and Christian media, including Huckabee, Fox & Friends, Eric Metaxas, The Hugh Hewitt Show, The Christian Post, Fox News, Hannity, Glenn Beck, The 700 Club and more. He and his wife reside in Atlanta and have four grown children and 10 grandchildren. 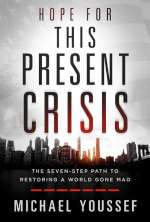 Hope for This Present Crisis is published by FrontLine, an imprint of Charisma House.